Please ensure Javascript is enabled for purposes of website accessibility 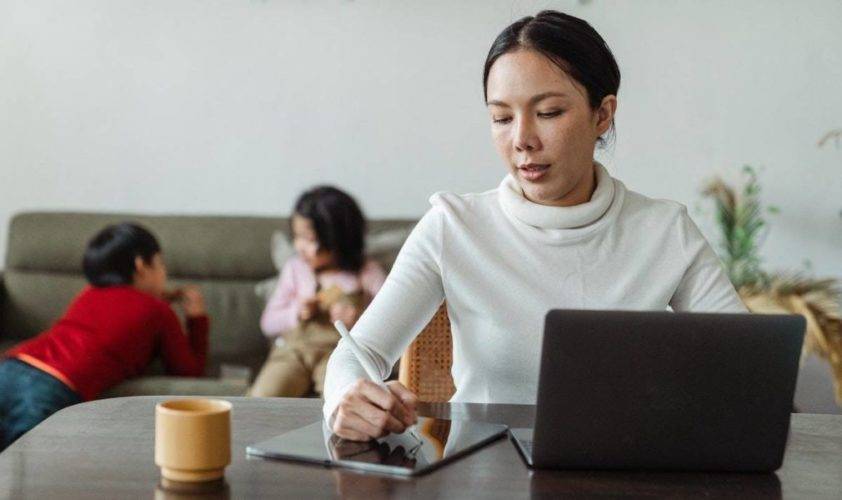 When asked how she strikes a balance between her roles as a mom and a career woman, Liza Meak laughs. “There is no balance,” confides the mom of three, a former TV news producer, a documentary filmmaker and currently a senior communications manager at Nutanix. “Some days you’re going to be an awesome employee, awesome at your job or career, and an awesome boss — and you’re going to be a horrendous parent. And that means that you come home and you’re giving them Cheerios for dinner as opposed to a well balanced meal that has a vegetable, starch and a protein. And they may not get showered and they may go to preschool or school the next day in dirty clothes just because you can’t do it all.”

Such is the sort of wisdom that Team Laddrr has gleaned though our video interviews with working parents. So if you’re struggling to juggle it all, know that we see you — and that you’re in good company. But perhaps the trick is to accept that striking a balance on a daily basis may not actually be the right goal.

Liza explains that when she worked in broadcast journalism, she used to produce the station’s Olympics coverage. As the games approached and her travel increased, she knew that work would be a priority for a set amount of time. “But when there are things going on in your kids’ lives, like say, for example, health issues, then at that point, your kids will come to the forefront for a period of time.”

This concept of shifting priorities to meet changing needs is echoed by other moms we interviewed. Erin Brenner, Chief Product Development Officer at Pear Therapeutics thinks of work-life balance as something to strive for over weeks or even months. “My philosophy is that you can do anything, but you can’t do everything all at the same time,” says the mother of two. “You want to be thinking about how to integrate these things together, but knowing that there are times when you need to flex a little more toward work and other times that you need to flex a little bit more towards home, and hopefully it all balances itself out over time.”

She acknowledges that there will be occasions when things feel out of whack. “Be kind to yourself because there are some days when the balance just doesn’t feel right one way or the other, and you’ve got to just work through those and hope that over time those balance out — or if they don’t then hopefully that can be a signal that maybe you need to take a look at why it’s feeling that way.”

Mauria Finley, mom of two and Vice President of Google Store at Google, describes the same concept in mathematical terms. “Life is a pie chart. You have work, you have family, you have your hobbies, exercise, whatever it is for you,” she says. “Be intentional about the time you give and how you allocate it. It’s not going to be perfect day-to-day, but when you think about it in terms of weeks or months, you do need to make sure it’s balanced and course correct it when it isn’t.”

To lessen the tugs that working moms feel on a regular basis, Mauria practices what she calls “intentional dropping of perfection.” Instead of trying to be and know everything, as was her tendency before children, she chooses what’s really important to her and lets the other things slide. “My husband and I sat down when the kids were quite little and we made a list of what matters to us. And we both love working so our jobs mattered a great deal to us and our family mattered.” What didn’t matter? “Our house is far from perfect, I was never the mom with the cute treats at the birthday party, my husband’s car just stopped working in San Francisco one night because he hadn’t maintained it in 18 months… but it didn’t matter. The big picture was right.”

Achieving a consistent balance between work and family is never easy and may be downright impossible. Setting your sights on the big picture, embracing imperfection and adjusting as you go not only allows you to be kinder to yourself — it may actually make you more effective. Now doesn’t that sound perfect?

Step Up With Us